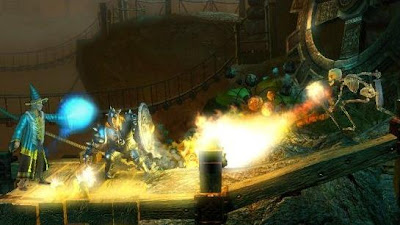 Trine is a three player game available on PC and PS3 that requires all three characters to play a critical role to get the characters through a level full of puzzles and undead enemies.

A few months ago, I took a day and played through Trine with John and Todd. Trine is a light purchase costing about $20.00 and giving hours of laughing, hating, and questioning friendships with the the other two players. Trine requires an extremely coordinated group using the talents of each character to achieve the ultimate goal.

Armed with a shield and a sword, the knight is your frontal defenses. He is your primary attacker that ultimately shields the other two from fire, arrows, traps, and pitfalls. The best of groups are led by the knight.

A master of the bow and swinging from platforms, the thief is used as a support attacker and allows the group to uncover treasures that cannot be reached by the other less mobile characters. Nine chances out of ten the thief will swing into some spikes within three seconds of starting the level, so they play a much less vital role in the game than the other two.

The character that gets you results, the wizard is the key to winning. Without a wizard you do not have a group. You might as well give up. The wizard uses magic to create a path for the group by creating boxes, planks, or levitating and moving objects. The draw back to the wizard is that he cannot attack. This creates problems when there are so many undead wanting to kill your wizard.

Now you should have a good understand of the game and who the players are. I want to explain the game from the perspective of software development. You can consider the enemies as anyone that wants to make life difficult for you. Whether it is giving you more work, changing your priorities, or someone wanting to tell you the latest bad news. If you have not already seen it, this game has some solid ties to the software industry. Let me lay out a scenario for you.

This scenario is familiar to me and it works well. The wizard is in the back doing what wizards do. He progresses the three through the level. The Knight is out in front protecting the wizard from the undead enemies. The thief finds all those "treasures" that the wizard and knight could never find. The undead enemies are constantly approaching the knight and desperately want to get to the rest of the group to change, redirect, rewrite, and add functionality to whatever it is the wizard is doing.

If the wizard were on the frontlines with the knight, the wizard would not last long. There needs to be a barrier between the undead and the wizard. That barrier must be the knight. All communication from the outside world goes through the Knight. If it does not, chaos ensues. If that line is breached once it will be breached again, which leads to problems.

I think we can agree that the previous scenario is a common one and it probably works pretty well. Let's try another scenario.

The Thief can help or hurt the group depending on how it is used.

Is this scenario really so different from the first? Let me get less hypothetical and say that a great example of this scenario in action is when your boss has 37 tasks that your team needs to complete by the end of the week. If the boss came straight to the employee, chaos would ensue (once again). If the boss goes to the lead with 37 tasks the lead can take that information and give it to the wizard in a more positive manner by separating it into manageable chunks. Four or five tasks are a lot easier to handle than 37. The end result is a happy group.

The key to all the scenarios is to take care of your wizard. Without them, it is game over.

After three years as a developer in the ticketing industry, I have moved on. I just needed a change.…